That’s where multicolor LEDs come into play. PCB real estate is always in short supply. A good multicolor LED can deliver all the colors of the rainbow in one simple, compact, easy-to-install device.

An LED is the semiconductor device that spontaneously emits light when driven by current. An LED consists of a die with an embedded anode and cathode, encapsulated in an epoxy resin case (see figure 1).  The emission wavelength of the LED is determined by the bandgap energy of the semiconductor material structure.

Unlike some lasers, LEDs can be tuned to emit different wavelengths. Instead, multicolor LEDs are devices with co-packaged LED dies. The color emitted is a function of how the device is driven. 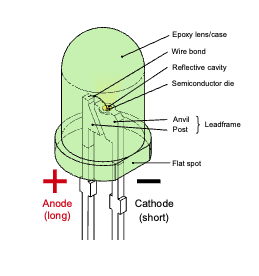 However, and this is where it gets interesting, the fact that the two devices share a cathode means that a positive voltage can be applied to both anodes (see figure 3). Now, both LEDs emit light and the result is a third color. In the case of our green and red LED, the color mixing properties of light mean that the output will be perceived as amber. This type of LED can be very useful for off/on/standby indication, for example.

The second class of multicolor LED is the RGB LED. In this case, the three LED dies (see figure 4) are once again co-packaged. RGB LEDs can be connected in one of three ways:

This scheme enables all three LEDs to be excited separately or together. If we add a microcontroller, we can control the intensity of each LED. Color mixing makes it possible for the device to generate any color of the rainbow. 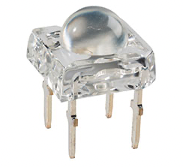 Figure 4: In Bivar’s R50RGB-F-0160 RGB LED, SM0807RGB, and SM1204RGB, three co-packaged LED dies share a common cathode. Applying voltage to any of the other leads separately or together will cause that die to emit light. By controlling output using a microcontroller, this sort of multicolor LED can use color mixing to emit a wide range of colors.

Multicolor LEDs provide an easy avenue to significantly enhance the user interface or appearance of a system. These devices are simple to install and very robust. Best of all, they provide great flexibility and intelligence while minimizing space and power consumption.

To learn more about incorporating bicolor and tricolor LEDs in your next design, contact your Bivar representative.