If you’re designing a user interface with LED indication lighting, you might be thinking about viewing angle — do you need users to see the light from the forward direction only or from the side? If you’re adding a light pipe, you need an LED that matches the acceptance angle. The problem is that the datasheet doesn’t show either of those parameters. What’s an OEM to do? Look for the plot of emission pattern or directivity radiation pattern, that’s what.

Plotted in polar coordinates, the directivity emission pattern shows the spatial distribution of the light emitted by the LED. Put simply, it describes how output varies as a function of angle. This characteristic is directly related to viewing angle and how effectively you can couple the output into another optical device.

In an LED chip, the p-n junction emits light isotropically. Some of that light will travel back to the substrate and be absorbed. Some of the light will be incident on the surface of the chip at a large enough angle that it undergoes total internal reflection (see figure 1). The rest of the light will refract at a range of angles q<90°.

[Note: Many LED chips are designed these days with a reflective layer beneath the junction so that back-emitted light will reflect in a forward direction, increasing brightness.]

Figure 1: Light incident on an interface between media of higher (n1) and lower (n2) refractive indices will refract away from the normal at progressively larger angles (q2). When the light is incident at the critical angle (qc), it can no longer exit the media (center). Beyond the critical angle, light undergoes total internal reflection (right).

The theoretical emission pattern for an LED is a Lambertian, which is described by

where I is the relative luminous intensity and q is the radiation angle. If we plot equation 1 in polar coordinates, it shows that the output of a Lambertian emitter is spherical, with maximum intensity at a normal angle (along the Z axis), reducing to one half maximum at 60° from normal. Of course, we don’t live in the theoretical world, we live in the real world. How can we use these data plots to help inform the choice of LED?

In commercially available LEDs, the chip is either wholly protected in an epoxy resin case (through-hole designs) or mounted on a ceramic substrate and protected with an epoxy resin cover (surface-mount devices (SMDs)). The shape and materials can be used to alter the emission pattern of the LED, making it possible to choose a device with a distribution best suited to the needs of the application. On the datasheet, look for a plot labeled directivity radiation pattern or emission pattern.

Flat surfaces result in distributed radiation patterns that are closest to our Lambertian pattern (see figure 2). They are good choices for applications that require a wide viewing angle.

Figure 2: Directivity radiation patterns for a pair of flat-face LEDs demonstrate near-Lambertian emission distribution. The data plot on the left corresponds to a flat-face SMD (the Bivar SM0807) and the one on the right corresponds to a through-hole device with a diffusing material added to the epoxy resin (the Bivar R3YDL). (Source: Bivar)

The case of a through-hole LED or the lens of an SMD can be used to focus the output distribution of the device (see figure 3). They can be shaped like a commonly seen parabolic dome. This shape tends to modify the emission pattern to be more forward directed (see figure 3). Hemispherical shapes produce a broader distribution.

Figure 3: Directivity radiation diagram for a domed through-hole LED (the Bivar 3BC-X) shows highly forward-directed output. Compare this to a device with a hemispherical lens (the Bivar R20BLU-5-0080).

Lensed LEDs are more suitable to applications needing forward directed output, such as an LED being used with a light pipe or one designed for viewing from the front. Note, light pipes can also be equipped with lenses to further shape the output distribution.

Different applications require different viewing angles. To optimize your design, determine what output distribution your system requires, then look for a compatible LED. Note that most manufacturers have a wide range of options, so work closely with your vendor to identify the device that delivers the ideal combination of attributes.

Find out which of our wide range of LEDs is best suited to your application. Contact your Bivar representative for expert design assistance. 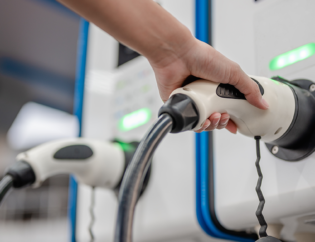  Category LEDS
0 Comments
When it comes to specifying the right LED for your device, color and brightness are...

 Category LEDS
0 Comments
Indication lighting and functional illumination play critical roles in the communication between a device and...


Through-hole vs Surface-mount LEDs – How to Pick the Best Device for Your ApplicationWhen should you outsource your LED indication and illumination engineering?
Loading Comments...